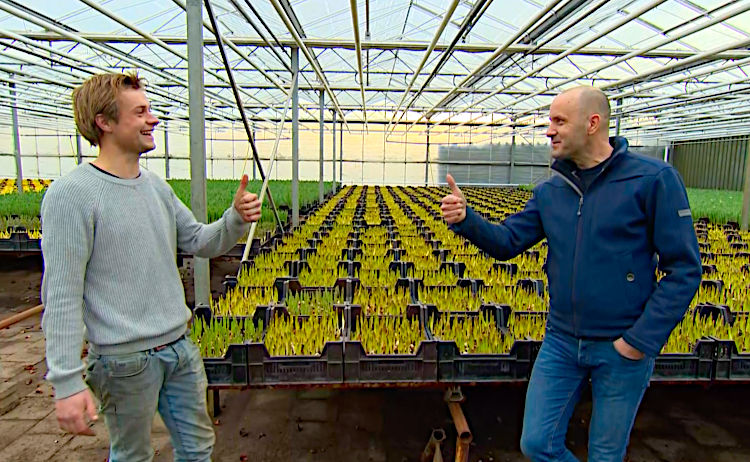 We saw earlier that Johan has succeeded in arranging his own Bollenjongens-flower-bed in the Keukenhof. Today he is taking a ride through the Flower bulb region to get the tulip bulbs from the boys. Then he immediately drives to Keukenhof to plant the bulbs together with Frans, the designer of the park. And even if it is a modest perk, it still turns out to be a tough job.

It is winter in the Flower bulb region. It's snowing and freezing, but that doesn't mean nothing is happening in the area. This is because tulips are grown in Frank's greenhouses. The bulbs are given a special temperature treatment that makes them think that it is already spring so they bloom in winter. Millions of bulbs are pinned by hand in boxes and grown on water for several weeks before being bunched and sent to auction. We also show special images of the very first forcing tests in the Bollenstreek long ago, not in a greenhouse, but with heated pipes under the ground.

Until recently, Bart worked as a planner at another flower company and occasionally at his parents' company in Hillegom. This week he quit his job and decided to work from home full-time and eventually take over his parents' company. That may seem obvious because he is offered a nice company on a silver platter. In a conversation with Bart and his father, however, it turns out that this is not as obvious as it may have been in the past.

And Bart also takes us to the barn, because like Frank, Bart also does flower forcing in winter, but in hyacinths. And as always, things are slightly different from tulips. Bart shows us how you get a more beautiful hyacinth flower that also lasts longer in the vase.

And finally, the bollenjongens answer the question whether they are proud of what they do. And not everyone pronounces it that easily.

The flower bulb region. A colorful area in the province of South Holland. The beautiful fields of tulips, daffodils and hyacinths attract more than a million visitors every year and both flowers and bulbs are important export products for The Netherlands. But how do the bulbs get on the land and the flowers in your […]
Read more..

It is October and planting season in the Dutch flower bulb region. One ‘bollenjongen’ sees it as a new start on the way to spring, for another spring is still far away because of the rain in autumn. Johan is with Daan who can finally get his full boxes of bulbs out of the shed […]
Read more..

Episode 3 answers the question that is often asked after the first two episodes of 'Bollenjongens': why are there no girls in the series? The boys explain. The Keukenhof is the largest flower park in the world that attracts more than a million visitors every year. But that's really secondary. The park is actually mainly […]
Read more..

Episode 4: Bulbs for the Keukenhof

The bollenjongens have planted their bulbs and winter is coming. This means that the bulbs must be protected against frost and that is why a layer of straw is placed on the land. Reed used to be used for this and images from 1950 show how that was done then. Nowadays it is done by […]
Read more..

We saw earlier that Johan has succeeded in arranging his own Bollenjongens-flower-bed in the Keukenhof. Today he is taking a ride through the Flower bulb region to get the tulip bulbs from the boys. Then he immediately drives to Keukenhof to plant the bulbs together with Frans, the designer of the park. And even if […]
Read more..

Episode 6: Everything in bloom

When winter is over, the straw that protects the bulbs from the cold has to be removed from the land. They call this chopping straw and Martijn shows how he does it in Hillegom. The straw is pulverized and blown into the paths of the tractors. However, there is also another method that forcibly sucks […]
Read more..

The Flower bulb region looks beautiful three months a year, but the region unfortunately also has a less beautiful image. When the region makes the news, it is often about the crop protection products that are used in bulb cultivation. And that is not surprising, because it has always been the case that these crop […]
Read more..

Episode 8: Cut off the head!

The time has come, we can show the result of the bollenjongens-bed in Keukenhof. Six months ago, Johan planted the bulbs in the flowerbed together with Frans, the designer of the park. A rainbow was made from the tulips that were cared for by the bollenjongens. You regularly see irrigation machines on the fields in […]
Read more..

The Flower bulb region is a major tourist attraction in march, april and may and more than a million people from all over the world enjoy the bulb fields every year and visit the Keukenhof. In this episode the bollenjongens guess where most tourists come from and what they actually think of all those tourists. […]
Read more..

Episode 10: Across the world

This final episode focuses on the export of the bulbs. Lucas works for an exporter of bulbs and explains what needs to be done before the bulbs can be exported abroad. The bulbs all have to look perfect, especially for Japan, because there they do something with the bulbs that we can't imagine. Allan's company […]
Read more..
We zijn heel benieuwd wat jij vindt van de serie ‘Bollenjongens’. Vind je het interessant, mooi, grappig of misschien wel verbazingwekkend? Of heb je andere woorden die je te binnen schieten als je het over ‘Bollenjongens’ hebt? Laat het ons weten! Mail naar johan@bollenjongens.nl
Bollenjongens is een programma van Johan Overdevest